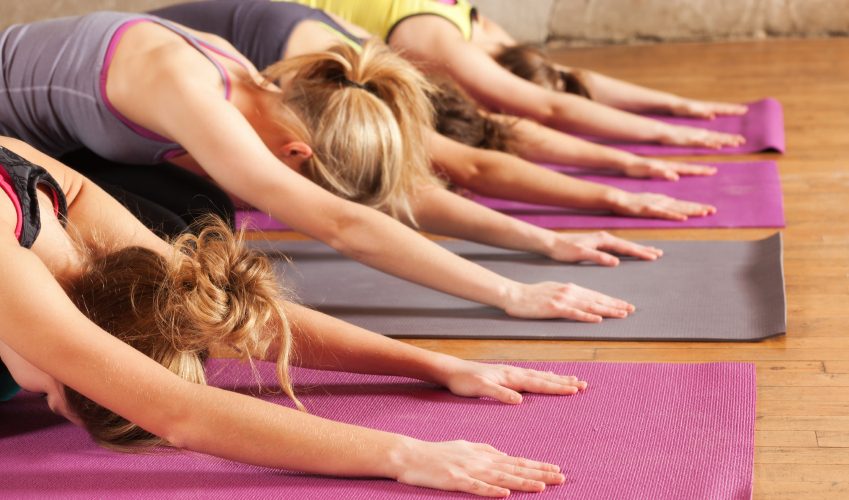 I’d never seen her before, but she came late to class and plopped her yoga mat directly in front of mine, even though I had arrived thirty minutes early to secure my spot. In hot yoga we politely “stagger” our mats so that everyone can see themselves in the mirror.

While seeing my 52-year-old body contort in slightly painful ways was not a priority, I was irritated that she blocked me completely. I emitted a loud sigh and moved my mat slightly to the left. Class began.

As we moved into our warm-up, my hot flashes did the same, and irritation hit me all over again.

I tried to move into the present in a calm, centered way. The balancing series began, which is supposed to occur from a standing position in the middle of our mats.

Instead of following instructions, the Kim Kardashian look-alike moved to the very back of her mat. This put her directly beside me with less than two feet between us.

We held our arms out to the side for the next move, and my hand hit her upper arm. She sighed, loudly, and glared at me in the mirror.

“They said middle of the mat,” I said through gritted teeth, knowing that we are not supposed to speak in class. She looked straight ahead and stood firm. So did I. We bent to reach our feet with our arms still spread wide, battling each other like a Corner and a Wide Receiver on a long route.

Next, we attempted the bow pose which calls for grabbing one foot behind you, holding your opposite arm up, and charging forward to balance. She made it about ten seconds before she fell directly into me as I, miraculously, almost held the pose for the first time ever. She hissed at me as if I were the offending party.

I muttered to her again, “MOVE.” She wouldn’t. Neither would I. She was probably considering her dinner options, while I was in the midst of slowing down all estrogen and shutting down parts of my body that have been working for fifty-two years. I assumed she would sense my dire rage and concede.

By the end of class I was tense and irritated. She stood up, flipped back her long, barely damp brown hair and took her mat outside. I tried to get up quickly to say something to her with my hair sopping wet and a bobby pin hanging down in front of my face. I didn’t have the energy to flip anything, including my finger.

I laid back down with a cool rag on my face trying to work up the energy to stand. I finally made it, wobbling like a newborn deer, and staggered out of the room with my mat and water.

She was nowhere to be seen.

To maintain my yoga composure, I decided that she was in that class to teach me something greater than a desire to destroy her. Maybe she was there to teach me that:

Tonight I will attend yoga from a place of total peace and compassion. I will focus myself before walking into class. I will get my spot at the front of the class.

And if that beautiful young woman comes and puts her mat behind mine, I will do everything in my power to drive her crazy.