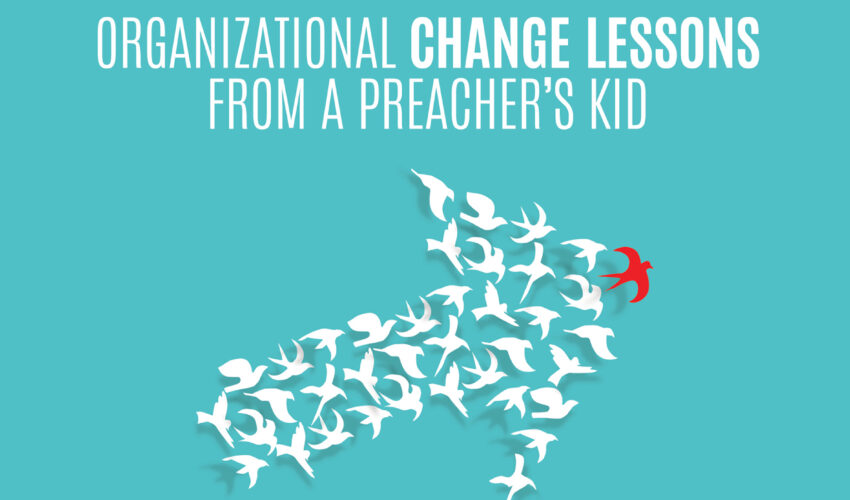 My family drove cross-country twice, once as small children in a Ford Wagon, and another as grown teenagers in a Hornet AMC hatchback. You can imagine which drive was more comfortable. But I learned some things on those drives between churches, when radio was AM-only and reception was rarely found in most towns, where iPads and streaming television or movies on trips was a futuristic hope, and singing together was the way we passed time.

I learned that change is not only inevitable, it can actually have some pretty golden moments. That’s why I’m sharing those stories in my new book, “Amazing Change: Organizational Change Lessons from a Preacher’s Kid.”

Sitting in the back of the Ford Wagon, I remember using my Weave-a-loom™ to make absolutely useless pot holders that could be used only by Barbie™ and curled around the edges to form more of an elastic bowl than anything else. I remember using my Spirograph™ to make large circles in different color pens that required no artistic ability but made me feel talented. But the memory that comes in most clearly is one of the peace and anticipation that came to each of us while on the drive between those churches.

I realize that church has, sadly, become a political topic. But for us, it was a way of life. My father was a minister, and our journeys between churches occurred because he and mom had driven change in one church successfully, so it was time to move to another. The changes were never easy, and the money was never quite enough, so this trip provided us the gift of space. If you ever grew up in a minister’s home, you know that the (then) wall phone rang at least every ten minutes with some new question, new disaster, or new request. Your minister parent was called out at all hours of the day and night for visitation, and Saturday nights were spent preparing, Sunday morning and evening services attended, Tuesday night was visitation, Wednesday night was potluck dinner and choir practice, and Friday was youth night.

And in the midst of this routine came congregants in need, those dissatisfied with dad’s sermons, those carrying casseroles with mystery meat, and a house that was never quite our own. It also brought music, love, and lots of laughter. The impact on my life did not lead me into the ministry, but into a life of helping drive change. Going into organizations, helping them with certain projects, and using my knowledge of people and what moves them is my absolute passion. I spent over 20 years learning from the school of a preacher’s kid.

The stories in this book are about people, with change lessons about how to organizationally apply what I learned. There is humor and truth in this book – it is not a religious tome but simply a guidebook for anybody who has to get people to do something different, appreciates the human spirit, and still believes that the human heart is a better GPS than any powerpoint or spreadsheet.

I feel like we keep trying to leave humanity out of the corporate equation, because it’s the people side that is difficult and unpredictable. So many of my potential change opportunities were thwarted by leaders who didn’t want to pay for the people side, they just wanted the new system or technology or product. I can tell you this, without doubt, when you leave out the human, you will never fully succeed.

Because to really get through change, it is the heart that ultimately will keep the organizational body going. It is our humanity that will save this world. And it is our disregard of both that could destroy it.

I hope you take a look at “Amazing Change.” It is my love letter to the world of change, and to each and every one of you. It is a love letter to my amazing parents, who had the courage to drive change in an environment where faith was impacted and their salaries were paid by those they strove to move through it. I believe the stories are for any and everyone, because every single one of us changes a life every single day, whether through a project at work or a smile on the street.

We can always count on one thing; the very second we sit in and every second we anticipate will be different than the one we’ve just experienced. That’s the way of the world. It’s always moving, with or without us.