A Dame and a Dodo 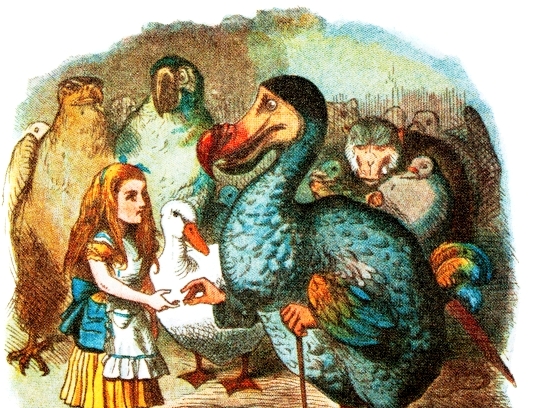 Once upon a time there was a woman named Alice. One day, in her fiftieth year, she was walking into a CVS to buy some Ginko to help with her memory.

On the way in, she forgot why she was there and ran smack dab into the glass door that, inexplicably, opened towards her. The blow was significant, and she was knocked unconscious.

The darkness into which she fell soon grew less dim, and she started to see light. She figured this journey was into her unconscious mind, which seemed to look a lot like her backyard after weeks of no mowing. She was now standing in the grass, and heard the sound of squirrels fussing and birds singing. She plowed through the high grass, and followed the sound of water, in no apparent hurry.

As she walked, she recognized the call of the Dodo bird. Trying to determine how in the world she knew what a Dodo bird might sound like, she walked smack into him.

“Well, hello there,” he said, straightening the feathers she had knocked askew. “Who are you?”

“I’m Alice,” she replied. “I thought you were extinct.”

The Dodo bird laughed with a great, lilting laugh. “No – people just think I’m extinct because they stopped choosing to see me.”

“I know how that feels,” said Alice. “It seems that as I hit my fifties some people have stopped seeing me, too.”

“Really? Well that’s rather ridiculous,” the Dodo said. “Are you as noticeable as you used to be?”

Alice thought about it for a moment. “Well, maybe not,” she said.

The Dodo raised his feathered arm to his lips in a thoughtful pose. “And why not?” he probed.

“Well, because I’ve learned to wear muted colors so people won’t notice my weight. I wear a lot of black and beige.”

“That’s a shame,” the Dodo said. “You must just blend into the rest of the world. Tsk, tsk, tsk. I find your personality rather colorful.”

“Thank you,” Alice murmured, still pondering her disappearing act. She continued thinking, put her index finger to her lips.

“And I’ve stopped speaking up as much as I used to, because I’m sure the younger people have better things to say.”

The Dodo stomped his spindly leg making the high grass blow slightly. “Well, that’s absolutely, incredibly, extremely ridiculous,” he said. “You have years of experience, wisdom and wit to share with those young people. They need to hear from you even when they think they don’t.” he said.

“To keep from appearing to be extinct,” he continued, “you have to know where you’re going. For example, I’m going to the next field over to bask in this beautiful sunlight. Where are you going?”

“I don’t really know,” Alice said. “When my kids were around I had a very clear map. I was going to help them thrive.  But they are on their own now, and I’m not sure where to go.”

“Now that’s a knee slapper,” the Dodo said, bending over in laughter. “You’ve spent twenty years guiding children, and now you’re free to explore your own life. How awesome is that? I suggest you get moving. Draw a map. Oh, the places you’ll go.”

Alice started thinking about how she’d never been to Europe, or Kansas, or to the Washington Monument. She had a lot to do. “Okay, I think you’re right. I do have places to go.”

Alice began to laugh as well. She found some flowers and put them behind her ears and one in her teeth. She started to dance, spinning in circles like Maria in “The Sound of Music.” In fact, she made herself so dizzy she fell down and hit her head on a rock. She woke up slowly, staring into the face of a CVS employee.

“Are you okay m’am? You weren’t technically in the door yet, so we’re pretty sure you can’t sue us.”

Yes, she was back in the real world.

“I’m fine,” she said. She jumped up, forgot about the Ginko, and went next door to the clothing store. She was buying bright colors today.