Am I Menopausal Or A Powerful Werewolf? 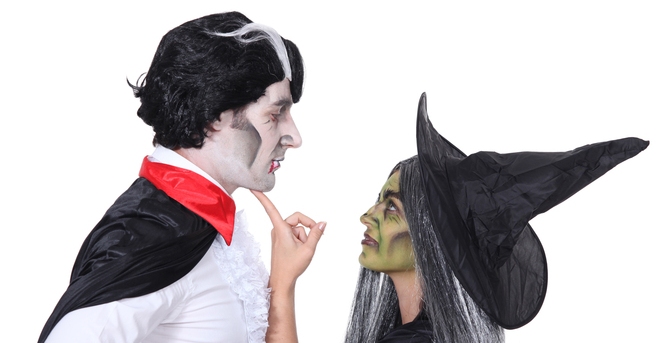 Imagination is wondrous, but when my grocery clerk thinks she’s a vampire, I get a little concerned. Her dyed black hair, pale make-up and the tattoo of a bite mark on her neck make me wonder why she is working in a grocery store. Maybe she has her eye on the meat department.

I’ve always believed that imagination is greater than knowledge, but facts do keep our feet on the ground so that when our imaginations soar over the rainbow, we can tap our ruby slippers and find our way home. Not everything can be yellow brick roads and green-faced witches. Sometimes, we need to pay the bills.

Recently, I’ve read about people who think they’re vampires, or werewolves, or witches. I saw a young college student interviewed online who thinks he’s a merman. On his day off, he pulls on his scaled lower-half and sits on a rock. I don’t know how to tell him that if your fishtail is made out of polyester and glitter, you’re probably not going to do well underwater.

Recent television shows such as The Vampire Diaries, Grimm and Once Upon A Time reflect our need to be something other than human. I must admit, after watching The Vampire Diaries, I am a little more attracted to vampires than I realized. They’ve come a long way from Barnabus Collins.

I wrote a blog about wanting a vampire for Christmas, and soon became the target for scathing feedback. Apparently, I didn’t know what a “real” vampire is actually like. I was misrepresenting them by following televised models of vampires which are not, it seems, faithful to legend. This left me stumped. I didn’t realize “real” vampires had such a following.

And for a woman who watches Ghost Hunters faithfully and totally believes in the Mothman, I’m not judging the vampire faithful. The difference is that I don’t wear wings like Mothman or stand in a room believing that I’m invisible like a ghost. I tried that approach once when listening to a really bad PowerPoint presentation, and it didn’t work. Everybody saw me trying to walk out that conference room door.

Granted, behind every great imaginative character is some element of truth. Like Count Dracula, whose human inspiration was Vlad III, Prince of Wallachia (1431-1476). His father was VladII Dracul.

Vlad III became known as Vlad the Impaler for the simple reason that he shish-kabobbed and tortured approximately 80,000 enemies. I mean stuck them on big sticks in his yard. I bet he was forced to build things out of Popsicle sticks in his Vacation Bible School when he was a kid. That can drive anybody to unhealthy fantasies.

His character helped ignite the imagination of Bram Stoker in his creation of Count Dracula. I love the fact that writers take real characters and turn them into fictional, memorable personalities. Can you imagine the future “monsters” that will be created hundreds of years from now based upon our political leaders?

We could have Sarah the Impalin, known to hunt and kill while flying on wings through the sky. Or The Gore-y Al, a large zombie-like character with vast intelligence but very little personality.

I think most of our fictional characters are a wonderful mash-up of real people with the intriguing possibilities of the unknown world. Real characters can become fictional characters. [quote button_text=”Tweet the Quote”]But I’m not sure that Bram Stoker, were he alive today, would walk into Kroger and believe that his bag girl was a vampire.[/quote]

Maybe real life has gotten so boring for those constantly entertained by television that we’re sure we must have magical powers, because checking in and out of a mind-numbing job is just a little too depressing to accept.

Motivational speakers might have finally gotten through to us. If you can’t change your situation, then change your perspective, they say. Bagging groceries might not be the most exciting job in the world, but if you can bag groceries as a vampire and consider tearing the jugular out of the lady who waits for you to bag everything in plastic before telling you that she wants paper, the job becomes tolerable.

In this upside down world of weapons and unexpected attacks and constant coverage of everything horrible, maybe being a mermaid seems to be a safer position. Let’s face it, who had it better than The Little Mermaid. She was adorable, and lived in this wonderful place where the fish sang Under the Sea and everyone danced and her father was the King.

Who, in this time of such tragedy, wouldn’t rather live under the sea?

And I must admit that I’d prefer to believe that I’m becoming a werewolf rather than accept the fact that, in my menopausal years, I now have to shave my face. How much cooler would it be to know that as the facial hair comes in, it brings with it tremendous power? Plus, according to recent werewolf movies, the hair would fade away after the full moon and I would be left with six-pack abs.

So, maybe we forgive ourselves the need to be fantastical creatures. But, let’s also keep our feet on the ground. Being human isn’t that bad. Perhaps we feel vulnerable in an unpredictable world, but remember that vampires can be staked through the heart, werewolves can be killed with a silver bullet through their heart and mermaids probably just get menopausal and have their scales dry up.

There will always be people doing bad things fueled by fear and anger. But, we also get to have babies, and flowers, and dogs, and family, and laughter. Not such bad stuff.

Plus, I’m really concerned that some young person in black who doesn’t floss regularly is going to bite me on the neck. And I’m just not up for that.