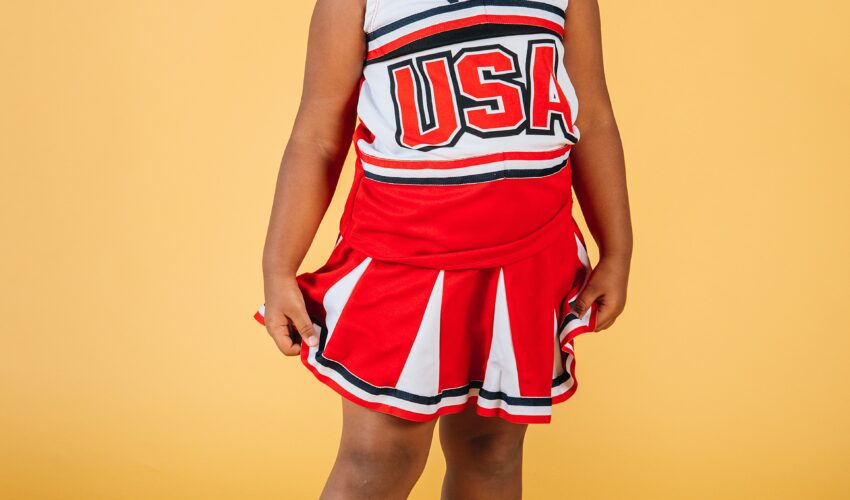 My elementary school had a football team but no cheerleaders. So, I created a business proposal and went to the Principal’s office with my recommendations.

After I shared my idea, he sat quietly for a moment. Then he stood up behind his desk, gave me a thumbs up and reached out to shake on it. I was relieved since his spanking paddle was on the wall beside me and I wasn’t completely sure what he was reaching towards.

My next steps included contacting a young woman at church who had been a cheerleader in high school to see if she could help, and she was up for some coaching. I put up a sign-up list, and most of the girls who signed up were my friends and didn’t have a lot of money. The popular girls mocked the whole idea. They had no desire to cheer with a bunch of girls who sat at the loser picnic table at lunch and traded sandwiches to keep things spicy.

To save money, we went with blue skirts and gold tops – or whatever we had in the closet. We had gold, mustard, bright yellow and lime green shirts tucked into skirts that were sky blue, dark blue, and royal blue. Believe it or not, our outfits were more coordinated than we were.

We started practices after school, and put in a lot of work. Or at least reasonable work. Our cheers weren’t perfect — I remember when we yelled “First and ten, do it again” after a touch down — but we made people laugh. We loved to support the team.

Then a mother of one of the popular girls came forward, offended by our mismatching outfits and our lack of precision. She went to the Principal to ask that we disband and hold tryouts. To his credit, he declined that offer. But he did say that if she wanted to have her own squad on the field at the same time, she could.

The new team had personal coaches, and many had taken gymnastics. I could do a backward roll, but that didn’t work out well on a muddy field. I learned that the hard way.

The new team shone in perfectly matched outfits, and their cheers were never incorrect. Their precision was driven by over-achieving parents who made sure they practiced for hours. And it showed.

Little by little, my squad lost their joy. We felt embarrassed by our outfits and lack of skill. We hung in there until the end of the season, but the fun was over.

That’s what the ego does. It takes pure joy and grinds it down with doubt-creating questions. It sees young girls laughing and says, “you should take this more seriously.” It sees imperfect outfits and says, “Shouldn’t you match?” And since 80% of our thoughts come from the left brain that is in charge of the ego, it often works.

This week, I challenge you to experience true joy. Don’t judge what you do, just observe it. Don’t question if you’re laughing too loud; laugh if it feels right. Wear whatever you want without apology.

Cheer to your heart’s content. Do a backward roll in the mud if you want to, but don’t let anybody’s judgment, including your own, steal your joy.