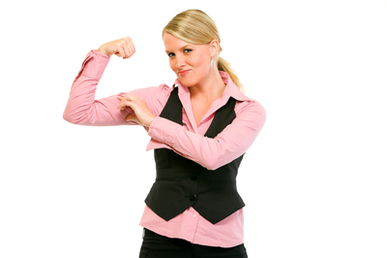 Did you know that America has one of the lowest percentages of females in CEO positions? We hold 4.2% of the Fortune 1000 CEO positions.

That’s not so good.

I have coached both female and male executives from Fortune 500 companies, and spent many years observing what behaviors help people succeed — particularly women.

I shared some of my thoughts in my Huffington Post article titled “Why Leaning In Beats Wrapping Up” After posting that article, several women asked if I would share my insights on what women can do to  move up at work.

[quote button_text=”Tweet the Quote”]So, twice a month whether you want it or not, I am going to share Dame-Up tips for women at work.[/quote]

If you wonder what Dame-Up means, it’s the female variation on Man-Up. It means grow a pair of breasts and kick some ass. Yes, that’s the kind of T&A we’ll be talking about here.

By the way, these tips pertain to any job, whether you’re an executive or a blogger and can be found under the Working Dames tab.

Here are my first two tips for success in the workplace:

Good Lord, women, stop worrying about being incorrect. The next time I hear a woman start a brilliant comment with, “This might not be right, but . . .” I am going to have to slap her.  Or coach her. This is a warning.

If you think that you have something to offer in a meeting, or you have a point you want to make in a blog, stop panicking over the fact that your point might be incorrect. Speak up. Write it. And, if you’re wrong, then you’re wrong.

If you don’t make a big deal out of it nobody else will either. The world needs dynamic ideas, not “correct” ideas. Dame-Up and do it.

Tip #2: Save the Defensive Moves for the Boxing Ring

Dames are fierce, but too often women battle the wrong things in the workplace.  Their energy goes to defense when it should be more focused on offense. Also, most women don’t like a lot of sports analogies, so that might be the wrong example . . . but I don’t care because I’m going to Dame-Up and say it anyway without being defensive.

I watched one woman meet with a newly hired head of marketing who had declared that he was bringing in a multi-million dollar sales program, and the CEO had already approved and funded it. The female training director spent the next hour trying to convince him to use the internal training program instead.

Once we left the meeting, we discussed the results.

Me:  “He already has this approved, and it’s part of his package deal. Why are we still fighting for the work?”

Training Director: “Well, because that program should be ours, not his.”

Me: “Yes, but it’s not, and the decision is done, so why don’t we just figure out how to get a leadership role in the program?”

Training Director: “I’m not giving up yet.”

Of course we lost the fight, and she lost the confidence of the marketing director. Women need to always ask,

Don’t choose a losing fight and then dig in. Digging in just makes you an immovable target.

I’d love to have your thoughts. You can disagree with me – I won’t get defensive. I can’t. That was just one of my tips.