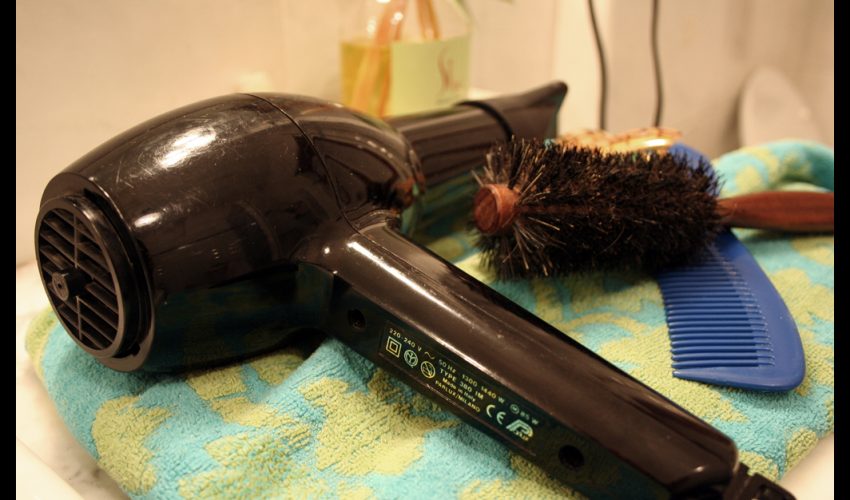 One morning when my daughter was three weeks old and my son was 26-months old. I, too, just wanted to take a shower. So I put my daughter in her “love bucket” (the name of cheap carriers the hospitals provided) and gave my son his favorite Godzilla toy that he could play with while I basked under the hot water.

I tried to create a lot of steam so it would look like a jungle (something I had promised my son to help him create the proper environment from Godzilla) and I talked non-stop to both kids to keep them entertained. Neither of them napped like other nice, helpful children. Not mine. They stayed awake all day every day.

As I started to relax in the shower, I smiled at my good fortune. I had two healthy kids and hot water. Then I heard a weird noise and realized my son had lost interest in Godzilla. Suddenly, a large object flew past the shower curtain headed towards the floor of the tub.

You can imagine my horror when I realized the unidentified flying object was the blow dryer that  had been plugged in when we walked in the bathroom.

It was like slow motion, watching that blow dryer fly through the air, waiting to land on the floor of the tub which was filled with two inches of water (our tub never drained well). I fully expected someone to yell “Dead Woman Bathing!”

When the blow dryer was fractions of an inch above the water,  I turned into a stuntwoman. I jumped through the shower curtain as if it were a window in an old western, hitting it so hard that the tension rod popped off the tile and the entire curtain and rod ensemble fell with me on top of it.

Unfortunately, we all landed on top of my daughter in her love bucket, who began to scream with disgust. The worst part was my son, who stood in fear as his naked, dripping mother writhed like a fish on land trying to get off of her infant. I can’t imagine the trauma he still deals with in dark dreams.

The blow dryer had unplugged itself when he threw it, but I did not realize that until I had destroyed the bathroom. Luckily, the bucket protected my daughter physically, but not mentally.

So, to all the young mothers out there dreaming of a restful shower, here’s to you. Please watch for flying blow dryers.