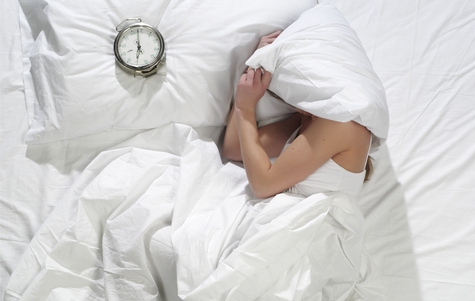 Donna: [Whispering to self, trying not to wake her husband.] Good God, why don’t I sleep anymore? I can’t take it.  Sleep deprivation – first thing they do to prisoners of war.

[Donna spends what seems like an hour forcing her eyes shut. Finally, she opens them and stares at the ceiling where her clock is projecting the time in red letters. This amazing moment provided by Brookstone. She realizes only 10 minutes have passed. ]

Donna: [Whispering a little louder, hoping her husband wakes up a little.] What the HELL? This is ridiculous. No wonder I found my glasses in the crisper drawer this morning.

[She dramatically throws off her covers as another wave of heat engulfs her. The dog kicks her in the thigh, as if she’s turned the temperature up just to annoy him.]

Donna: [No longer whispering .] I’m not doing this on purpose, Riggins. It’s not like your 102 degree body heat doesn’t bother me!

[Husband begins to stir, lifts up his head, sees Donna’s red face and desperately tries to act as if he is still asleep. Too late. Donna has seen the whites of his eyes.]

Donna: Are you awake?

Donna: ARE YOU AWAKE?

[Donna turns on the light. Husband and dog sigh at the same time. They both realize it’s going to be a long night.]

Husband: [Back turned, head on pillow, slurring his words.] Is that a rhetorical question?

Donna: Yes, because it’s not just ironic, it’s cruel that women don’t sleep for years because of children and work, and then when the children finally are on their own we go through menopause and can’t freakin’ sleep. That’s a cruel twist of fate.

Donna: Funny. I know I shouldn’t wake you, but I can’t just sit here. And if I go into the television room I’ll be awake for hours and I’ll watch a marathon of “Snapped” and then you’ll REALLY be sorry. So just talk to me for a minute. . . Geez, is it hot in here to you?

Husband: No, it’s not hot. It’s 28 degrees outside. The ceiling fan is going. I need mittens.

Donna: Are you kidding me? Come on, it’s like a furnace in here.

Donna: Don’t placate me. I’m sweating all over everything.

Donna: You used to find that sexy.

Husband: You didn’t use to talk through it.

[Sound of snoring fills the room, as husband drops off in that magical way of his. . . . smack dab in the middle of a sentence, he’s gone, as if he’s been hypnotized and the magician lulls him back in.]

Donna: How do you DO that? Huh, Riggins? How does he fall right back asleep?

[The dog responds with a snore that is louder than her husband’s. Donna is pretty sure he is faking it. She walks into the kitchen and takes an Advil PM, pulls out the most boring biography she can find, and waits for the pill to take effect. It is 2:00 a.m. At approximately 2:30  a.m., Donna begins to feel tired. She puts her book down, and turns out the light.]

[Donna opens her eyes, ready to start her day. She notices that it’s still dark outside. She wonders if she’s slept for more than 24 hours. She looks to the ceiling to check the time. It is 3:00 a.m.]

Check out Donna’s mini e-book – a collection of some of her favorite blog posts on hot flashes, rages, and other gifts from God!