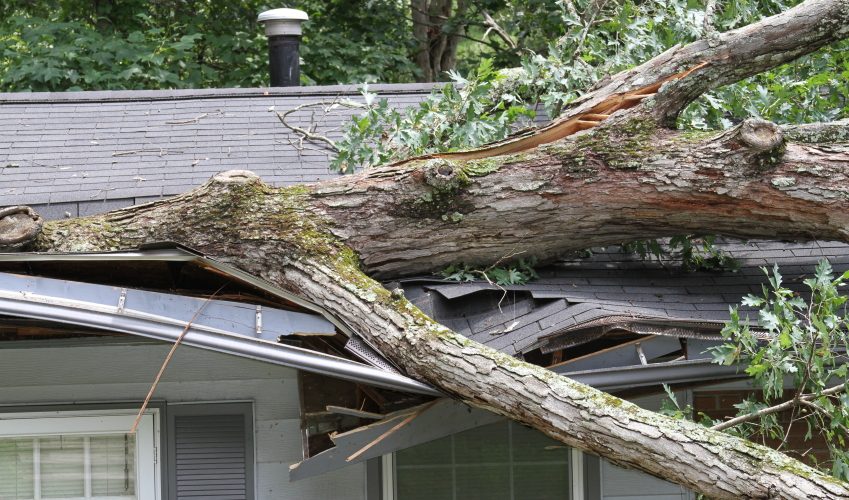 After an oak tree came pounding through my dining room window and wall around 11:00 p.m. Saturday night, I was over it. My husband and son were both near windows (which I had told them not to do but, being men, they were doing it anyway) as an oak tree was propelled through them.

I was in the back bedroom when I heard the explosion of glass. Running toward the sound, I dreaded what I might find. Luckily, I found my husband and dog frozen like those live models in a New York window. My husband was on the way out the door with the dog (smart move in a hurricane) when it happened.

Within minutes, I was standing on a ladder with nails in my teeth trying to nail my daughter’s shower curtain over a large hole through which hurricane force winds were blowing.

Hey, it was better than the garbage bags and packing tape we started with. Obviously, we are not relatives of MacGyver. I think we are direct descendants of Inspector Clouseau.

Trying to overcome the wind that was blowing glass into the room, I proceeded to verbally diss Irene. “Stop it Irene, you bi***” I screamed against her winds.

As the packing tape pulled away and another gust came through, I made eye contact with my son and we both burst out laughing.

What a night. That hurricane took 80% of the trees from our one acre front and backyard. Nine beautiful oaks. And, of course, our dining room and the external front wall of our house.

We blame our son because earlier in the day he kept posting on Facebook that Irene was “weak sauce” and a big joke. You don’t do that to a woman son, she will kick your ass.

For now, our contractor expects a total of about $50,000 worth of damage. And that doesn’t even include the loss of trash bags and shower curtains.

We lived through it, though. I hope those of you reading did the same. My son, who thought he could taunt any storm has now learned that you don’t mess with Mother Nature.