My Love/Hate Relationship With Lists 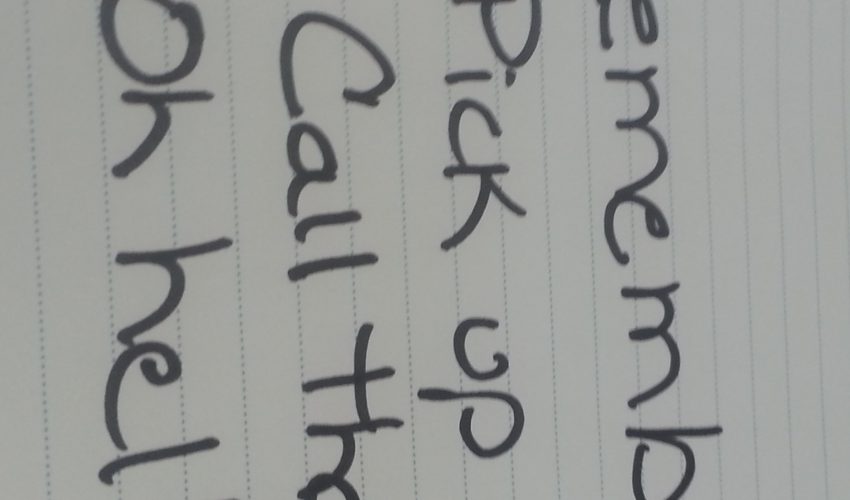 My husband and I have the same interaction most mornings.

“Hey, honey, do you know where I put my list of things to do today?”

“I think you put it by the telephone.”

“No, it’s not there, but here’s your cell phone charger.”

“Excellent! I’ve been missing that for days. Did you find the thing you were looking for?”

[quote button_text=”Tweet the Quote”]My short-term memory has taken some unapproved vacation time. As its boss, I am not pleased.[/quote]However, I don’t blame it for leaving.Maybe it’s concluded there are some things going on during my menopausal 50’s that should not be remembered.

The decision could have been made the day I walked into my office, used the restroom, and then wandered out to buy mascara, forgetting that I was there to send an important document to my CPA.

Or the day I was trying to book an airline ticket for my daughter and could not, for the life of me, remember her birthday. I even heard a “good gawd” from the agent as I stumbled over the date. Yes, I was there when she was born. Yes, it was painful. No, I can’t remember the date.

My short-term memory may have shut off the day I put mascara on only one eye and looked all Clockwork Orange for the rest of the day. Or perhaps it was the day that I yelled “Are you effin’ kidding me?” and burst into tears in the grocery store aisle because my favorite diet cookies had been replaced with their crappy generic version.

I think most of us are finding our memories smashed under the anvil of so much information. I turn on my computer at 9 a.m. and am suddenly inundated with information, including great blogs from intelligent people that are blended with threats of nuclear war and suggestions concerning the right fertilizer for my yard.

Oh, yeah, and Jessica Simpson is showing a baby bump and more district attorneys have been shot and Kim Kardashian got bangs and Margaret Thatcher died.

Every story seems to have equal value, so I’m suddenly tweeting about everything from shit to bangs to the possible big North Korean bang. Within an hour, I barely know where I am.

In light of this avalanche of information, I know why my short-term memory is in the islands. I also understand the new need for lists these days. Every blogger knows that viewership goes up if you distill your facts into a list.

In case you weren’t aware, Margaret Thatcher did pass away. Unfortunately, a lot of people probably read more about Shania Twain’s boots at the ACM Awards rather than the passing of one of the most powerful female leaders in our lifetime.

Maybe if the story on Thatcher had been written like this:

1. The only female Prime Minister in the history of Britain.

2. Very controversial, mostly because she was the only female Prime Minister in the history of Britain.

3. The daughter of a grocer, who graduated from Oxford University as a research chemist.

4. Married to a wealthy businessman, which doesn’t seem relevant but is always mentioned.

5. A strong leader, but was not wearing thigh-high boots or donning a new hair-do which means you might have missed it.”

See? Lists simplify information. The problem is that lists also over-simplify things by removing the guts of an issue.

Checklists are easy and often misleading but, hey, in a ridiculously brain-busy world I’ll go with whatever works.

I even looked back 40 years to check out Jerry Lucas’s The Memory Book, published in 1974. I told you my short-term memory was shot.

Jerry Lucas was a professional basketball player and genius, much like Bobby Knight. His passion was helping people learn how to remember things through association of objects. Here’s an example:

Need to buy a lamp today?
Also need to buy typewriter paper?  (Hey, it was 1974)
Imagine yourself putting a lighted lamp into your typewriter.
Need to also pick up a suit?
Imagine wearing typing paper instead of a suit.

I tried this approach the other day. I needed to take the dog to daycare, pick up some medicine at the drugstore, write three blogs and get groceries. So, I:

Imagined walking into doggie daycare while dressed as a pill bottle.
Imagined three blogs written on the prescription label.
Imagined blogs written about getting groceries.

Thanks to this genius approach, I walked into the doggie daycare and asked about my prescription, which totally confused the owner. I then wrote the shortest blogs in the history of the world about getting groceries, but then forgot to actually go to the grocery store. I’m still waiting for my prescription to be filled by Hanover Your Pets.

Association doesn’t work for me. I need my lists.

Here are 5 reasons why I’m glad my short-term memory is on vacation:

1. People no longer expect me to remember their birthdays now that I’ve forgotten my own children’s birthdays.

2. When I forget to put on make-up, I get sent home from work because everyone says I “look like death.”

3. When kids ask for money, I really do forget to send it to them. They thank me for my tough love. I have no idea what they’re talking about.

4. When that well-meaning young man tells me that I remind him of his grandmother, I can slap the hell out of him and then forget about it.