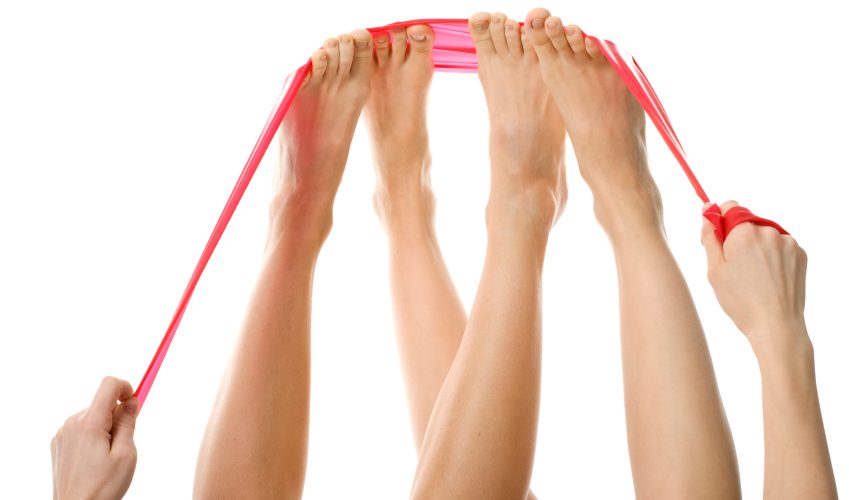 Last night I broke out my new Pilates DVD with Mari Winsor. It came with a contraption consisting of four reinforcement bands joined in the middle and looped on each end. I should have known pain would not be far behind.

The pain began as peppy little Mari kept saying things like “Put one foot in the bottom loop, and your other foot in the opposite loop. Next, grab the opposite two loops with your hands. Now stretch out your legs and put your hands over your head.”

There was not enough give in those bands to stretch out anything. I felt like the fitted sheet when you have it sideways and try desperately to make it fit the bed because it looks like the elastic ends should fit but they don’t. I pulled and pulled, but nothing happened.

That is, until something did. As I stretched my hands over my head holding onto the top loops, I attempted to straighten my leg with the attached band. There was very little give, so I gave it a good kick. At that moment the loop came off my foot, and the band snapped back and hit me smack in the face.

“Are you freaking kidding me?” I yelled in the privacy of my television room. I rubbed my face and put my foot back in the loop, just at the point that Mari said, “Now put one foot in both of the loops, and stretch the bands behind your back.” Again, I tried. This time the band popped off my arm and hit me in the stomach.

This was like an S&M movie starring one out of shape woman. Bands were flying and curse words with them. My lack of coordination had put me under attack.

I don’t give up easily, so as Mari skipped her way into bicep curls I gave it one last shot. My feet were standing on the loops, creating the tension needed for the top loops as I brought my arm from my side up to my chest. Standard bicep curl. I could do this with weights, why not a rubber band?

As my fist curled up to my chest, the rubber band popped out of my hand. This created a freed up fist that was now light as air. Still expecting to be pulling something, it flew into my face and I gave myself an uppercut.

The rubber band contraption is now put away in the time-out drawer used for badly behaved exercise equipment. I might try again, but next time I’m wearing padding.
Mari Winsor is a great Pilates instructor. If you want to try her workout, I’m offering you a link for the bandless version below :):