Need a Man? Consider a Parrot! 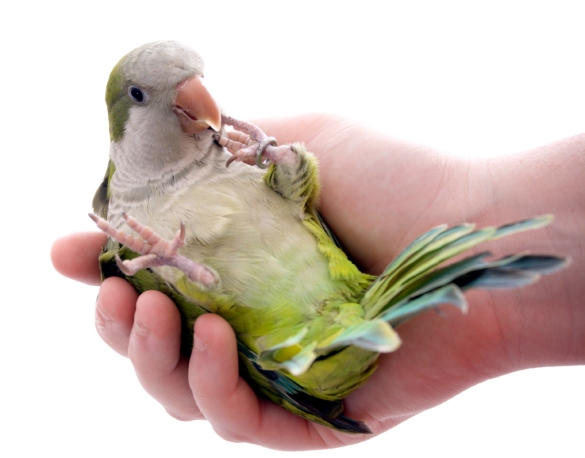 A lot of women are single now, especially in our age group. Many of them are looking for those perfect partners with whom they can share their home. I have a suggestion.

I had a Quaker Parrot for a couple of years. His name was Chaucer, and he talked and danced and hung out with me while I accomplished even the most mundane task. There’s nothing like cooking a meal and having a small green bird waddle through a kitchen and say, “Hey baby!”

I hand-fed Chaucer as a baby so he would bond with me. Unfortunately this meant he bit everybody else.

Parrots have the mental capacity of a kindergartner. They can recognize voices, choose shapes, and interact conversationally. One day Chaucer developed a little crack in his beak, so I took him to the veternarian. She wrapped him in a towel and turned him on his back to examine him. As she flipped him over, he said, “Uh-oh.”

She started to explain how I could heal the crack when Chaucer turned his tiny little head towards me and said, “What? What?” We both cracked up.

When I would enter the house, Chaucer would yell “HEY BABY!!” before he could even see me. As I walked up the stairs and he confirmed it was me he would yell, “Moonwalk!” and walk  backwards on the bottom of his cage. He knew this was my favorite trick.

I would applaud, and Chaucer would yell, “Take a bow!” and would bend his little gray chest forward.

I had a cat during this period named Punkin who came face to face with Chaucer one day. I forgot the cat was still inside and Chaucer was walking around the house. I had clipped his wings to keep him from getting hurt. Punkin walked up to him, and I peered around the corner terrified about what I might witness.

Chaucer stood there, puffed out his little chest, and said, “HEY! Here kitty-kitty-kitty!” Punkin was totally discombobulated and never approached him again.

He would sit on my shoulder at night and watch television, and whisper sweet nothings in my ear — literally, I could not understand him — and then bite my ear. The bite usually hurt, so I would yell, “CHAUCER!” and he would shake his head and say, “Bad bird, bad bird.”

He’d give me kisses on my nose, tell me he loved me, and start every morning with “Good morning world!”  Of course that was then followed by the loudest screaming I’ve ever heard. I felt like I was in the jungle.

When I went back to work, Chaucer started to pluck his feathers which meant he wasn’t receiving enough attention. Plus, he was biting everybody else in my family.

I located a woman who had lost her Amazon — the bird, not the company — and found him a home. I called her one day to make sure Chaucer was okay, and I heard him on her shoulder saying, “Hey Baby!” into the phone. He was happy.

I miss him. He was the perfect roommate. He only dirtied his cage. He listened intently, and called me “baby” no matter how bad I looked. He liked to dance, and at night I could throw a blanket over his cage and go to my bed to read.

He was the ultimate gentleman and a perfect companion.

So, wherever you are Chaucer, take a bow.