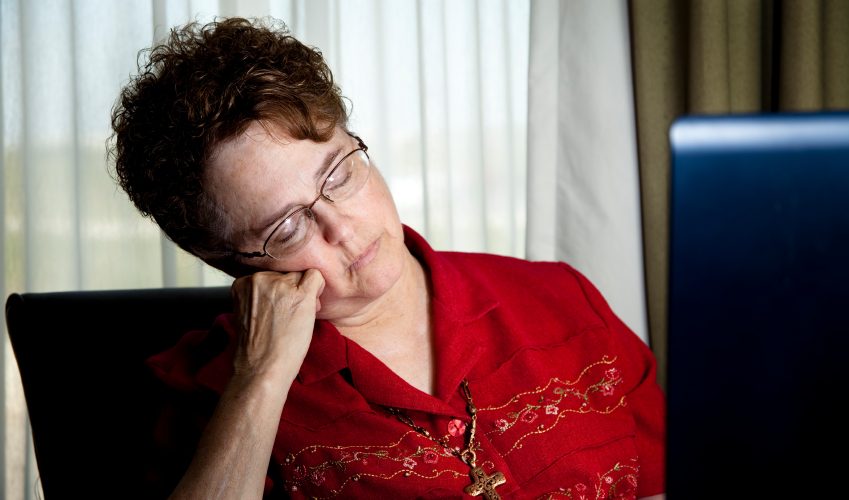 I turned 50 and got hit with both menopause and the sleepy stick. I was sure I had mono, or the flu or something worse. I had been warned about the menopausal rages, the hot flashes and the drying skin. But nobody mentioned the fact that  getting off the couch would become the equivalent of an Olympic event.

I finally would pull up to my office where I stumbled out of my car. I would leave my briefcase because it was just too heavy to carry and I had my bagel and everything.

Once in my office, I would use my last bit of morning energy to push the button on my computer and prepare for a day of work. I would go straight to Facebook where I would notice a mindless article about someone on television. I’d spend some time reading.

One hour later I would know everything there was to know about the Kardashians. The phone would then ring and I would glare at it wondering why would a client interrupt my Kardashian fact-finding. Why?

When the need to go to the bathroom would strike, I’d find any way possible to put it off. Once I even Googled the “space diaper” worn by the astronauts as a possible alternative.

Work would FINALLY end, and I would stand up to leave. Most of the time I had to steady myself as the blood that had been resting in my veins suddenly woke up and rushed to my head screaming, “She’s on the move! She’s on the move!”

I would drive home and exercise my middle finger repeatedly. At least something got exercise.

I would get home and stare at the kitchen counter waiting for a meal to appear. Nothing ever happened. So, I’d grab a Diet Coke and some Cheetos and plop down on my leather couch. I’d turn on my 42″ flat screen television.

My viewing included Tabitha’s Salon Take Over because Tabitha is bitchy and unapologetic about it. I’d watch several shows in a row. I’d think about moving but decide against it.

My husband would come home with dinner, and I’d rock backwards to get enough energy to stand. The dizziness would pass, and I’d take three steps to get the TV tray and ten steps to get a paper towel, because the napkins are in the far cupboard. I’d sit back down.

House Hunters would follow Tabitha, and I’d bask in the comfort of other people making decisions. Eventually, I’d notice that everyone was suddenly on an island or in Poland, which meant my time has bled directly into House Hunters International.

The phone would rarely ring, but when it did I would say something ridiculous like, “Of course, just as I relax somebody wants to talk. GAWWD!”

Several Say Yes to the Dress‘s later, I’d prepare to run my next marathon which included the dreaded closing ceremony. I’d grumble about how women have to remove make-up when men can just jump in bed without worrying about it. “In my next life, I’m going to be a man,” I’d say with split flying out of my mouth. My husband would smile and try not to make eye contact.

I’d get in bed and start to read my newest Martha Beck or Anne Lamott book. I find them both inspiring and brilliant, and I would begin to plan for my newest career in life. I’d write down some ideas for a blog and turn out the light.

Approximately one hour later, a hot flash would awaken me, and I’d find all of that energy that I didn’t have during the day. I’d pace around the house for an hour like a caged shrew and eventually take a Benadryl.

A few hours later, the morning sun would have the audacity to peek in the blinds, and my marathon would start all over again.

While I’ve moved past most of this stage at the age of 52, I just wish somebody had warned me about it. I knew I’d be hot. I knew I’d have occasional rages. I didn’t know how excessively tired I would be. That information would have saved me thousands on thyroid and mono tests.

So to all of you Dames who have not entered menopause, I hope this stage is not a part of your experience. But, if it is, just know that it’s part of the lovely package deal that comes with monthly cramps and teenagers. It’s a gift that keeps on giving.