Santa’s Sleigh vs. US Air 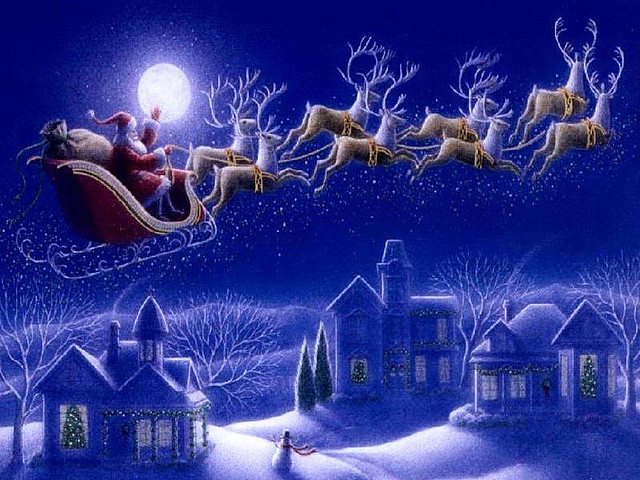 My trip to Rhode Island this week reminded me of the incredible joys of flight. Flying US Airways made me yearn for Santa’s sleigh.

First of all, Santa has to be on time. A mechanical failure on one plane (which I still believe was a total lie – I think our flight didn’t have enough people on it and they put us on the next flight out) delayed my flight home until 10:00 p.m. I waited for the flight with friends, and we had to converse over the sound of floor sanders that were being used to sand the floors at our gate.

Santa’s sleigh is built for his size. We finally got on the tiny plane – one of those where you walk onto the tarmac and then up stairs that were clearly created for Nancy Reagan. Somehow my girth, along with a purse and laptop, made the climb awkward and kind of dangerous for the woman behind me.

I was then seated behind a man the size of the Refrigerator Perry who proceeded to recline his seat so that his crew cut tickled the bottom of my chin for the rest of the flight.

Santa ho,ho, ho’s in a voice you can hear. Once we began to move, the pilot came on over the intercom and proceeded to whisper some vital information. I heard the one dreaded word – “de-ice.” For those of you that have experienced de-icing, it means you sit on the tarmac for 30 more minutes and can look forward to a de-icing Glade that will fill the cabin. It smells like a cross between turpentine and gasoline.

Santa stays awake during his flight, unlike my aisle partner. He fell asleep and proceeded to emit a snore that began with an inhale that whistled and ended with an exhale that emitted a sound similar to the T-Rex in Jurassic Park.

Santa unloads his gifts and finishes his route on time. US Air announced as we landed that there was only one luggage guy and four landed planes. Because our fair city has the slowest luggage delivery in the nation, I’m pretty sure the one luggage guy has one arm.

Santa never loses electricity. Once I finally arrived home around 1:00 a.m., I heard a deer in the woods and smiled. I looked at my beautiful home with a candle in every window. I smiled, amazed by my fortune. Then, with the wink of an eye all of the candles went out. Along with my front lights and every light in my house.

Oh well, I was home. And although I slept in sweats and long johns and chased a mysterious beep that kept sounding because of the power incident, I knew that US Air had brought me back to the place I love one more time. And for that, I’m grateful.