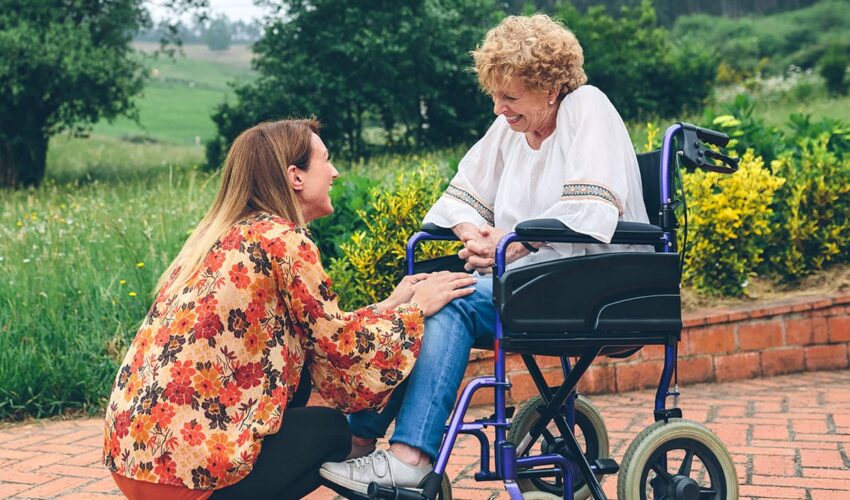 A week of boring work and a blah attitude had left me in need of a new purse.

Even as a child, I relished my dad’s green, plastic coin purse that when pushed would open to reveal shiny objects. It was like finding hidden treasure on a daily basis. My dad learned to put his change purse in a drawer that I could not reach, since it disappeared on a regular basis.

But on this night I had my own coinage, and I was in search of a comfort zone. So, I went to Marshall’s to find comfort at a discounted price.

As I was walking down the aisle towards the purses, I noticed an older woman in a wheelchair being pushed in my direction. She was probably in her 90’s, with thin gray hair and hands that moved constantly.

The young woman pushing her seemed to be a caretaker. She slowed down the wheelchair to look at a handbag herself, and that’s when it happened.

The older woman grabbed my arm.

I looked into her fading blue eyes, and noticed that they sparkled. She leaned towards me and said, “I’m having a baby!”

I frantically tried to process the situation. I was pretty sure she was NOT having a baby, but the joy on her face was both beautiful and, I guessed, rare.

I surmised that her mind was in another time and place, both of which were more kind to her.

Perhaps something gracious had translated being wheeled around holding the burden of dementia with being wheeled out of a hospital embracing a new life.

So, I said, “Congratulations!”

The caretaker looked at me as if to say, “She doesn’t know where she is or who you are.”

In that moment, something very loving in the universe had replaced her burden with birth.

Where’s the harm in that?

I broke into my own congratulatory smile and yelled “Good luck!” as the caretaker wheeled her away. I saw her clapping her weathered, spotted hands in absolute delight.

Sometimes, I think “reality” is a little overrated.

Because in that moment, a woman who had been confused had clarity.

A woman who had lost too much found something new.

A woman who had shed too many tears found a reason to smile.

And that, I think, is about as real as it get.