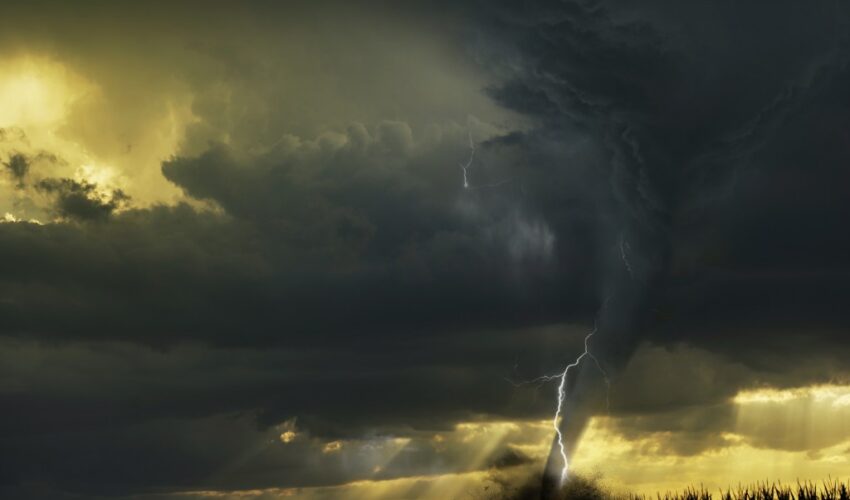 I sat with my husband, son and dog in the closet, buffeted by decorative couch pillows that had no chance in hell of standing up to a tornado. But thanks to ‘toppers,’ we also would have needed the Hulk to pull our mattress into the closet. 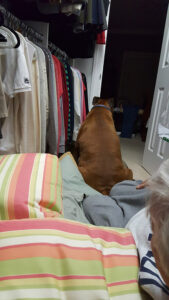 Last week, for most of the country, alarming weather conditions were posted everywhere. My husband and I started watching the news at approximately 2:30 p.m., as weather people slowly morphed from calm reporters of information to frantic interrupters of each other as yet another tornado was spotted.

A panicked weatherperson is similar to having an airline pilot come over the loudspeaker and say, “You’d better buckle up because I’ve NEVER flown through something like this before.”

As the weather people increased their volume, my husband started throwing pillows into our bedroom closet which we designated as the “safe place.” Quite frankly, the sheer number of hangers and shoes and other potential debris probably did not support that premise.

Around 7:30 p.m., a tornado was spotted a few miles from our house. We knew this because all of our phone alarms went off at the same time which made the experience a feast for the eyes AND the ears.

Mother Nature is a fickle friend for whom I have immense respect (this is me sucking up to Mother Nature). She wears her bandana and flexes her muscle whenever she feels like it.

Hurricane Irene taught me that, yes, an oak tree can fall through your house at 11:00 p.m. and the night can be so dark that while you hear the 100-mile-an-hour straight winds coming through the hole in the front of your dining room wall, you can’t even see the tree itself.

Since my family has a little PTSD from that storm, last week we chose to pile in the closet willingly. Except for my son, who tried to choose death-from-storm over listening to me babble.

He even kept his hood up as if it could protect himself from my stream-of-consciousness chatter. To be fair, I was a nervous extrovert, stuck in the silence of three introverts including the dog who just kept looking at me as if to say, “For God’s sake woman, have some pride!”

I talked about how we should fit ourselves into the shelves on the closet organizer and use a pillow as a door so that debris wouldn’t hit us, except that the organizer itself is made of pressboard and might collapse, at which point I considered the upstairs bathroom dropping on our heads and wondered if we should move to another location. Then I would deliver some awful pun, like “This storm blows,” or “Tornadoes suck.” It was pitiful.

And once the winds quieted down and the weather people on television collapsed from exhaustion, we emerged from the closet with relief. My son immediately texted an out-of-town friend and made plans to visit as soon as possible.

I have to admit that during the storm I made lots of promises to God. In fact, I should be heading to Calcutta to feed the poor any day now.

Sitting in that closet, I also thought about the things in our lives that bring fear to our front door.  Cancer. Job loss. Divorce.

Whatever the fear, it becomes our storm.

The morning after all of the tornados I couldn’t stop looking at the blue sky, which seemed like a postcard from God stating, “Sorry about the storm. Here’s a little something special just for you.”

Driving through Tappahannock on the way to work (an area in Virginia hard-hit by the storms), I was amazed at the resiliency of those who did not escape damage-free. I saw the best side of humanity expressed through the presence of power trucks and State Police and volunteers collecting food and water for the victims.

I was inspired by the spirit of people on the news who stood in a pile of trash that was their home while saying, “At least we’re alive. That’s the important thing.”

Last week, many of us became Storm Troopers. And in the moments of howling wind and pounding hail, we yearned for the monotony of a normal day. Like Dorothy, we found that the black and white moments in our lives are sometimes the ones we crave most when faced with a twister.

Now that I am back in the black and white of Kansas with my organizer and routines, I’m remembering the night of storms. And I hope that, if nothing else, I’m living my life a little better because of it. Remembering what’s truly important. Showing gratitude for life in general.

While perhaps talking a little less.