Thanks to My Samsung Galaxy Note II, I’m Cool in Kroger 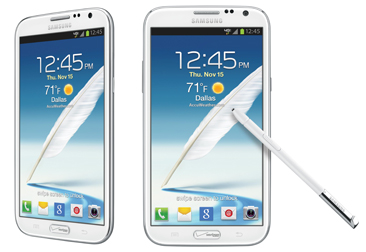 I stood in the aisle at Kroger, checking the grocery list.  I had neither forgotten my list in the car nor left it at home, and I didn’t have to dig through my purse to find it. Why? Because I wrote my list on the 5.5″ screen of my Samsung Galaxy Note II.

Using my nifty S Pen™, I wrote the list in my own handwriting. The pen is thick enough to help you write like a human, and it’s fun and easy to use. Here it is in my hand:

A moment of silence as I take into account the aging of my hand . . . okay, I’m over it.

As I stood in the aisle scratching off my items, a teenage boy walked up and asked if he could look at my phone. “This is really cool,” he said.  I looked around to see if anybody had heard him. I almost thought about asking him to reenact the moment so I could capture it with my phone’s video option and share it with my kids.

Apparently, just holding this phone makes me cool by osmosis.

I was supposed to play with the video capabilities this week, but became mesmerized by the ultra-cool S Pen™ that is easily removed from the bottom of the phone. You can use it to write things in your own handwriting, or choose the text option. You can also draw pictures. Here’s an example from someone at digitalversus.com.  My skill level is not quite at this point, but give me time: 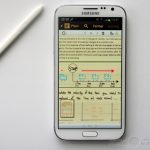 Air View is one of my favorite features. When your S Pen™ is about a half-inch from the screen, the device “sees” the pen and shows a little dot on the display, about the size of a laser point. This opens up a bunch of very cool features: Hovering at the top or bottom of a list, for example, turns the dot into an arrow and you can scroll through the list. Hold it over different icons and it will tell you what they are. I love this pen.

I tried to hold it over my my own brain, but it provided absolutely no explanation for the random thoughts I’m experiencing.

And for all of you women who are, like me, over 50 and dealing with menopause, here is the best feature. The phone makes a beeping noise and pops a warning when you walk away from the desk if the stylus has not been inserted back into the silo.

Now if they could only do that for my magnifying glasses.

My Samsung Galaxy Note II seemed abnormally large at first, but I have grown to love the size. I find it easily in my purse, and can see the screen without my glasses. Later, I’m writing my phone a love letter with its very own S Pen™.  And we’ve only just begun . . .

Want one? The 4G LTE Samsung Galaxy Note II is available from Verizon Wireless for $299.99 with a 2-year-contract.

Disclaimer: Realdames.com receives free devices from Verizon Wireless as part of their participation in the Verizon Lifestyle Blogging Team.  All posts reflect the independent opinion of Donna Highfill.