The Wizard of Odd — Chapter 2 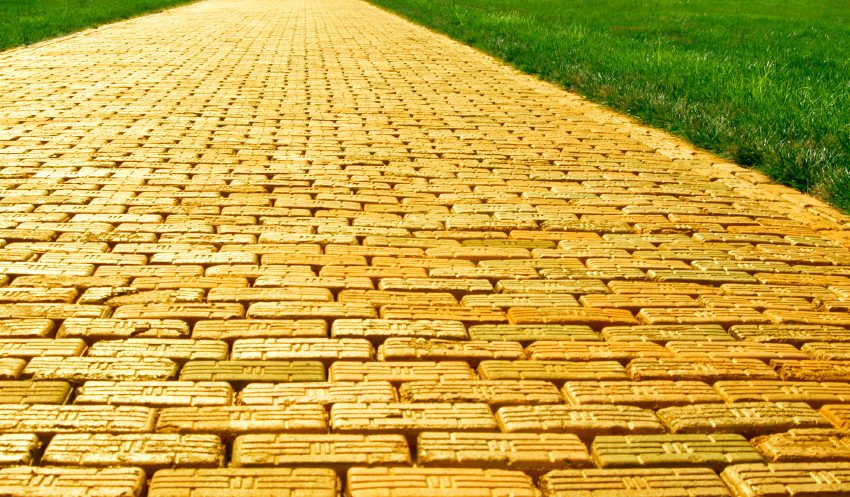 The following is a continuation of my blog from last week. If you didn’t read it, follow this link to get to it. Not that these two blogs constitute some complicated literary work like “Ulysses,” let’s say, but you’ll be a little lost if you don’t follow it.

Last Week’s Episode: We found Dorothy’s despair hitting an all-time high. She was stuck in the Land of Odd, a place we know as menopause.

Just as she had just decided there was not hope, she looked up and saw a big bubble approaching. Her heart pounded when she saw the wand and fairy dress.

“Yes, Dorothy, it is,” Glinda replied.

Dorothy watched the bubble land with a thud, as Glinda stepped out . . . her normally pale face red as a beat. She stumbled out of the bubble catching her wand on the way out. Dorothy watched with slight horror as Glinda cursed and broke the wand in half, throwing it to the ground.

“Geez, it’s HOT in that bubble,” she proclaimed, beads of sweat dropping on her now too-tight frock. “Gets kind of tight in there since my middle decided to be the only part of my body that would continue to grow.”

Dorothy noticed that her voice was the same, but her demeanor was a little edgier.

“So, Dorothy, you’ve entered the Land of Odd. Weird, isn’t it? It’s the place where flying monkeys would be welcome relief if they would cause a breeze when flying by, right?”

Glinda straightened her dress, and calmed a bit. Suddenly she looked up at Dorothy and smiled. Dorothy smiled back, seeing the old Glinda had returned.

“Kansas again?” Glinda retorted. “That dirty, dusty old farm? What in the world is so appealing about that place?”

“No,” Dorothy responded. “Not Kansas. I want to leave this new land and go back about ten years . . . before I started going into rages that cause me to kick the Lollipop kids because their song was irritating. Before my skin started wrinkling and hair began to turn gray. Before whiskers started growing out of my chin. I feel like I’m turning into the Wicked Witch, and I want to stop it.”

“Sorry, Dorothy. You don’t get to go back. You have to stick it out here until your body is ready to move on. And you need to show appreciation for this new land you’re experiencing,” Glinda said, trying to tape her wand back together.

“Appreciate it? For what?” Dorothy asked, incredulously.

“Well,” Glinda said, “You don’t have to be scared of any Wicked Witches. You’re as strong as they are now. And, you don’t have to worry about Lions and Tigers and Bears, oh my. They sense your new power. You have not left youth behind, you have entered an age of tremendous wisdom.

Did you know that when you are ovulating the part of your brain that impacts wisdom is at its highest functioning level? And when you go through the Land of Odd, your brain maintains that level of wisdom for the rest of your life?”

“Well, no I didn’t know that. But I still want a path that’s easier,” Dorothy mumbled.

“No, you don’t. This path isn’t any easier or any more difficult than the yellow brick road. It’s just different. It’s still a journey, and when you come to the end of it you will be a new creation with a fresh dream and a sense of victory. Stop spending time lamenting what is lost and look at what you’ve gained.” Glinda started to struggle to get back into her bubble.

“So, no ruby slippers this time?” Dorothy asked.

“Don’t need ’em,” Glinda hollered as the bubble strained to get off the ground. “You’re now more powerful than those ruby slippers. Pay attention to your path, and it will lead you where you need to go. And even though the Lollipop kids might not pay as much attention to you, and even if some men might see the gray hair and look away, don’t worry.

Life is about the size of your soul. That’s where your power lies. And this Land will give your soul wings. You’ll no longer be burdened by others expectations. You get to become you, at last. Congratulations, Dorothy. You will find the real you at the end of this path. I’ll be there waiting!”

Dorothy looked around and smiled. She looked at the dirt path and began to walk. She took off the ruby slippers and let her bare feet feel the dirt. She unbraided her gray hair and let it fly in the wind. She traded her dress for shorts. And . . . she started to feel the wings forming, slowly, on her soul.