There’s Something Hairy in my Empty Nest 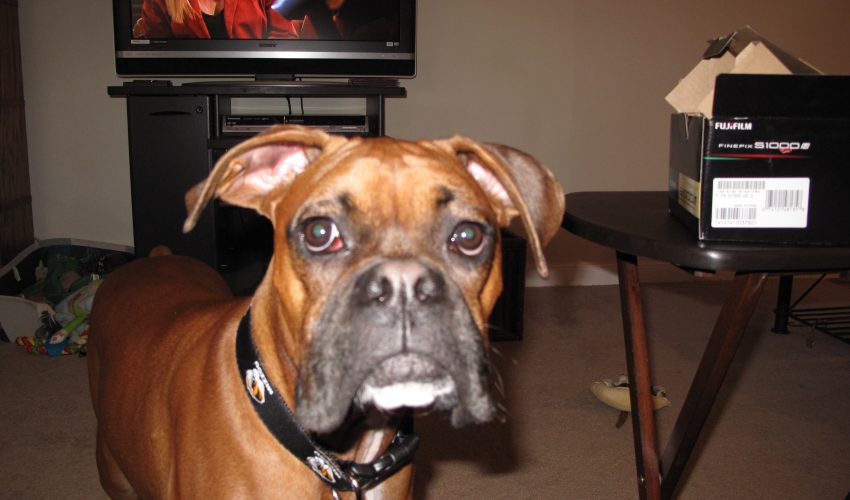 He’s an 80 lb. boxer. I bought him as a puppy my daughter’s senior year in high school, prematurely filling a void I knew was on the way.

How do I know this is true? Well, let’s see, I start the day by preparing him for daycare. I’ve talked about this before, but it never fails to surprise me that I have a dog in daycare. Who have I become, Lovey Howell?

I fix him a special breakfast so that he has energy to play at school.

I pack his lunch, putting his Iams dogfood into a nice little baggy. On that baggy I take a Sharpie and write “Riggins” in big letters so the teacher will know it’s his. That’s because he only eats Iams, which is more expensive than the food we eat.

Sometimes I receive calls at work during the day, because Riggins has been put in time out. For example, today he was put in time out for excessive humping of other dogs. I arrived for my consult with the daycare owner and since it was Wednesday I made a lame joke about it being “hump day.” I don’t think she appreciated my humor.

I pick him up at daycare at the end of each day and take Riggins home. Once in the house, he gets a special little treat. I then put him down for a nap while I microwave my meal and watch his sweet little face as he sleeps. Then he passes gas or his eyes roll back in his head as he does that doggy seizure thing and I realize he’s not quite as cute as my kids were.

Each night he goes into the bedroom at 11:00 p.m. with or without my husband and me. He lies down on the floor by the side of the bed, waiting patiently. Once we crawl into bed, he joins us. A queen size bed, two good-sized adults, and an 80lb dog.

He is the baby bird filling my empty nest. He’s cute, sweet, and a little annoying. Is that so different from our children?

For you fellow boxer lovers: