What Am I, A Farmer? 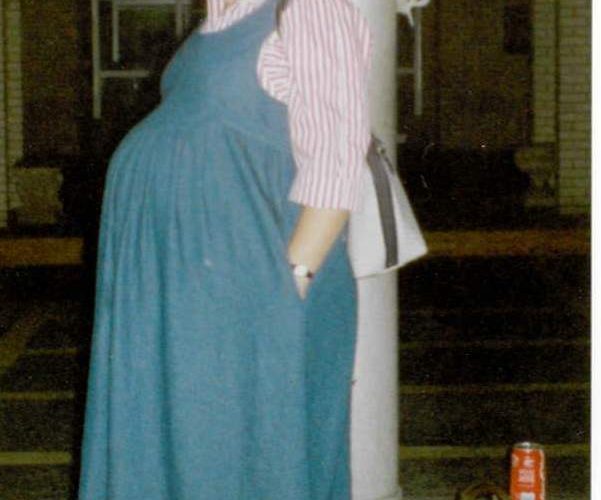 Perhaps I should have rethought my outfit before meeting the President of the United States.

My brother-in-law was a Marine Presidential helicopter pilot. He flew two presidents – President Ronald Reagan and President George H. Bush. In 1990, President Bush was scheduled to fly Air Force One into Roanoke, Virginia, and make the transition there from the plane to my brother-in-law’s helicopter.

I was a few days from delivering my daughter when my brother-in-law asked if my then-husband and I would like to be special guests on the tarmac. It would be quick – we would meet the two Bush’s and then leave, but only a few, select press members were allowed to be there. Of course I said yes, forgetting that the only piece of clothing I could fit into was my jean jumper and tennis shoes with no laces.

In addition, I had gotten a perm in my last trimester (which was considered safe for the baby) and my short hair kinked up to an unfortunate, Marge Simpson-like point on the top of my head. Luckily, the weight of my hair was balanced by the girth of my cankles. Here I am in all my glory. I could not fit my cankles into the picture: 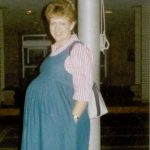 We arrived at the airport, and were awed by the sheer size of Air Force One. That is one BIG plane. We stood behind ropes on the tarmac itself as 100 secret service men fanned out from the plane, scurrying like ants with Ray-bans positioned on their very serious faces. They each had their weapon out, threatening any of the seven of us lest we have a sudden desire to rush the first family. They were safe. I was cranky and my ankles were so swollen and stiff there wasn’t much chance of a quick movement.

As President Bush and the First Lady descended the stairs of the plane, I was amazed at how thin they were in person. Of course, at this stage in my pregnancy, everybody looked extremely thin. They were detained at the bottom of the stairs by very important-looking people who were guiding them to the helicopters. As we waited for our introduction, I noticed two men running our way. I thought one looked a little old to be a secret service man, and one seemed to be missing his neck.

As they approached our little area I realized that then Senator John Warner and Reverend Jerry Falwell were positioning themselves to greet the President and his wife before us.

John Warner came to my husband first and shook his hand, trying to schmooze with the constituents. Jerry Falwell kept his beady eyes fixed firmly on the President, not even trying to appear interested in the rest of us.

I noticed that John Warner’s blue blazer had an expensive red silk lining. I noticed this because he positioned his hand in his pocket so you could clearly see the beautiful lining. After shaking my husband’s hand, he looked at me. I could feel his eyes taking in the entire outfit first, stopping with slight alarm at the protruding stomach. The stomach caused him to jump upwards, where he immediately noticed my unfortunate perm.. He looked away as if seeing the Elephant Man for the first time.

I’ll give him props for tenacity — he continued his attempt at conversation by clearing his throat and saying, “You know, M’am, I’ve done some farming in my day.”

My head snapped around and I replied, “Well, that’s fascinating. Because I haven’t.”

By the time we were done with our repartee the President and Mrs. Bush were moving towards the helicopter. They waved at us, but never came over for a formal introduction. John Warner and Jerry Falwell then began their race to see who would get in the Presidential helicopter. This was not a figurative race, they actually starting running across the tarmac in their expensive suits. John won. Jerry moved reluctantly to the second helicopter.

I’d like to apologize to farmers everywhere  in the name of our then Virginia Senator. You were dealt a deep blow. I know a lot of farmers, and I’ve never met one who looks like I did on that day.

I gave birth a couple of days later, and my perm calmed down within a few months. But the memory of John Warner trying to make conversation with a very pregnant woman in a very bad outfit will never leave me. That, my friends, was priceless.