Why Feminism was Born on Thanksgiving 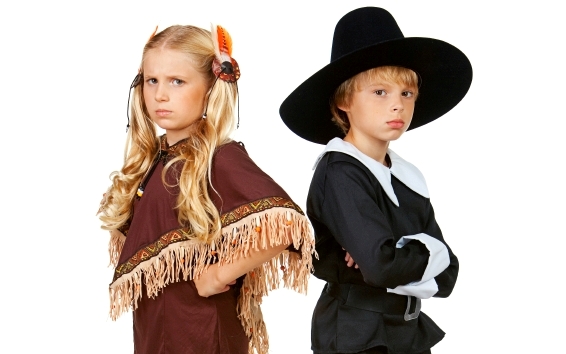 Disclaimer: The following story is about the men of old, in yonder years, not the enlightened males today (like my husband) who read this and found it to be an unfair depiction. He knows that he cooks, and I don’t, so he questioned my veracity. This is simply a story about the past. 🙂

I believe that the roots of feminism could be found in the relationships developed by the female pilgrims and Indians at the first Thanksgiving meal.

I can see it now. The male Pilgrims get together and say, “For Thanksgiving we will grab our guns and hunt turkeys and shoot a few Indians. Then we’ll eat.”

The women, in turn, say, “Why don’t you just hunt the turkeys and invite everybody over for a delicious dinner?”

“Okay,” the men say, excited by the prospect of a meal. “We shall.”

They invite the Indians over, and the men go hunt the turkey. Two of them fall asleep while hunting, a few others are thinking of other things as a plethora of turkeys cruise past them.

Meanwhile, back at the village, the women are growing impatient. A female Pilgrim and a female Indian each grab a gun, go out into the field, and shoot a few turkeys.

They return to their village and pluck the birds while other women are gathering maze and tending children.

Back at the not-so-much hunting lodge, the men have discovered peyote, and are smoking it. They figured if they called it a”peace pipe” they could justify it.

Back at the village, hours are spent cooking over scorching fires, and cornucopia is put on tables for decoration.

Dinner is ready precisely at 6:00 p.m., but the men are nowhere to be found. The female Pilgrims and Indians begin to complain in different languages — yet they completely understand each other.

Finally, the men trudge in from the woods, dirty, a little stoned, and without one turkey. They see the meal and thank God for such a lovely feast. The women glare at each other.  Then, because the men have the munchies, all
of the food is consumed in less than 5 minutes.

Once satiated, the men wander back out leaving the mess left behind. A few women gather behind a shack and discuss the unfairness of the situation. On this day, the first feminists were born.